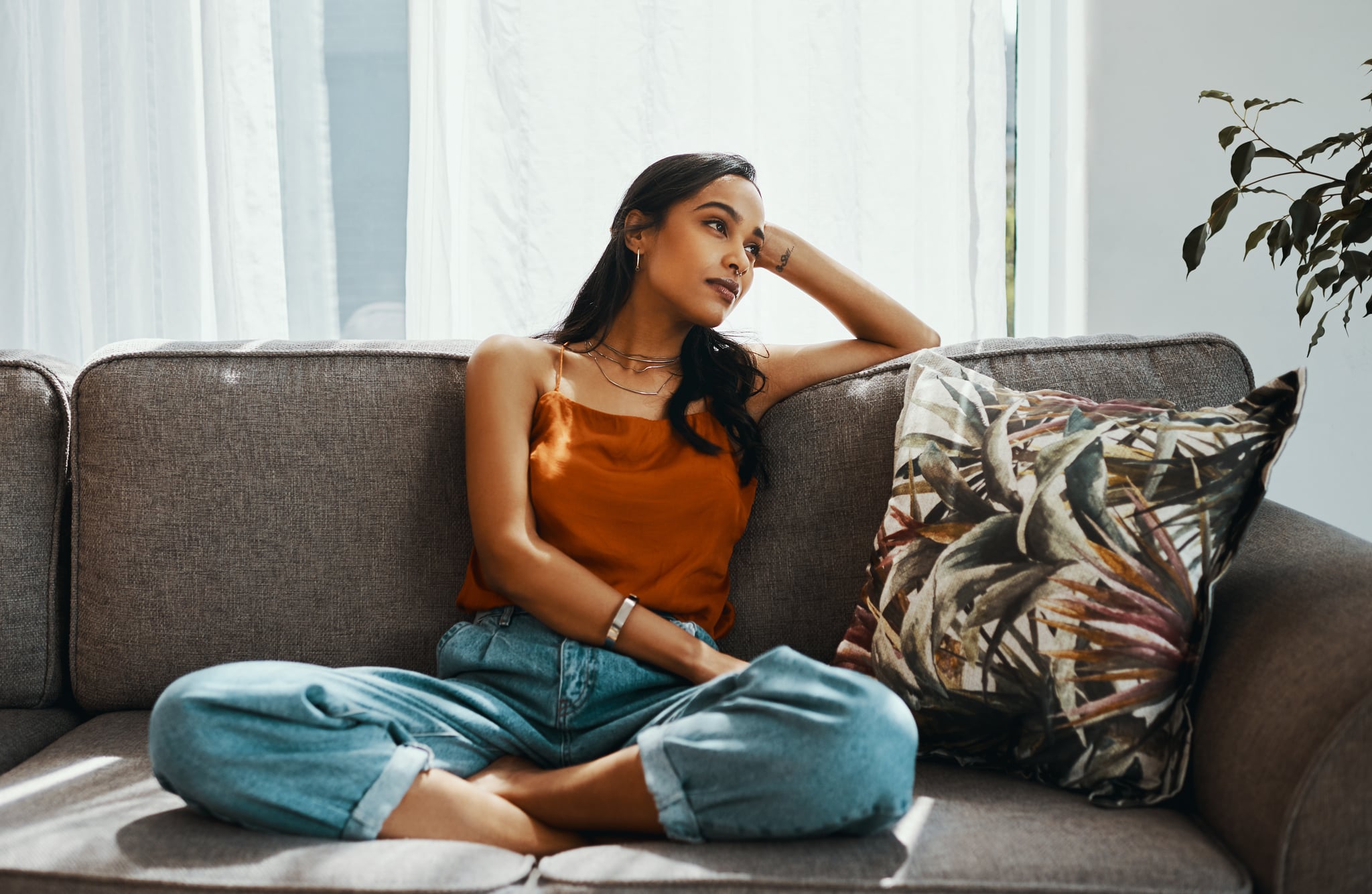 Living alone is usually an experience I equate with independence, lazy Sundays spent splayed on my couch, peace and quiet, and maybe just a tinge of loneliness every now and then. But ever since the pandemic hit, the world has spun around in every way imaginable — and that includes the effect of enduring ongoing stay-at-home orders solo.

I don't think I will ever go back to the same person I was before, and I'm grateful for that.

What at first was a novelty — extra time I could spend taking up new hobbies like knitting, piano playing, or doing online Pilates — soon turned into a chore; an "are we there yet?" experience that stretched out interminably. While friends living with family or roommates envied my situation, thinking it was better than being crammed into an apartment with other people craving different movies, exercise routines, and times for Zoom calls and loudspeaker concerts, I truly began to miss social interaction more than I ever thought I could. But that was the pandemic for many of us: a time to learn about the fragility of our society's rule book, and ourselves.

As I tried my hand at knitting cardigans, mostly while listening to the new Taylor Swift song of the same name, I thought about life — a lot. In a time warp of reality, where days turned into nights (especially during the summer), I deconstructed everything I thought I wanted and needed in my life: not necessarily becoming more frugal (my Amazon tab can vouch for that), but I did start to think more about the purpose of what I thought was important before — and how I wanted more heart-beating adventure and joy once the pandemic was over. Why did I always shy away from bike rides (I could fall) or rollerskating (I have fallen, many times) or spontaneous trips? Being at home alone for so long made me want to feel the wind whipping past me more than ever and to get a taste for the world, yet with more gratitude than I would have felt before.

Spending so much time in solitude not just gave me a complete catalogue of Netflix's greatest hits (I really count myself as a streaming expert now and maybe will try writing a thesis), but it showed me I was much stronger than I ever thought I was. Just like I avoided rollerskating because of my past embarrassing tumbles, I realised I always steered clear of being alone because of the loneliness I had felt at different points in my life. Not to get into horoscopes (not this time, at least), but even my Libra sign meant I was scared of solitude — and I was. Although I lived alone prepandemic, I would always make the case for a quick coffee with a friend in between work, exercise classes, and other get-togethers, scheduling in time with people so I wouldn't just have to be with myself. Once home, I would stream the latest show of the month and doze off — only to wake up and do it all over again (plus the added bonus of social media, of course).

During the course of this pandemic, however, the time alone became meditative. It turned into an atmosphere where I could really be myself and find out who that person even was. Was that person someone who would eat pretzels with peanut butter at 2 a.m.? Yes. But that person was also interested in reading books — a love I had tossed to the side in the past couple of years in lieu of restaurants and going out — as well as journaling my deepest, innermost thoughts.

Of course, not all of my pandemic sole quarantining was productive (it probably was mostly unproductive), but the pulp of it has been unforgettable and unshakeable. I am strong — almost like a Lara Croft of couch-surfing and killer intuition — and have discovered that I have more of an ability to be calm, thoughtful, and kind to myself than I knew. Cooking delicious meals for myself became something to look forward to, and I treasured eventually going for walks in the park and feeling happy from just smelling the crisp air.

Quarantining alone hasn't exactly been fun, but it's been eye-opening. I don't think I will ever go back to the same person I was before, and I'm grateful for that. The change was immutable.

Staying Home
Pressing Replay: How Artists in 2021 Are Bringing Back That Signature '80s Sound
by Chanel Vargas 01/12/21

British Celebrities
Olympic Diver Tom Daley Is a Crochet Fashionisto — and Yes, He Has Knit Himself Some Swim Trunks
by Sarah Wasilak 03/8/21

APIA
Trans Model Leyna Bloom Cried Into Tyra's Arms When She Saw Her Sports Illustrated Cover: "This Is a Huge Milestone"
by Sarah Wasilak 20/7/21

Confidence
5 Beauty Tips For Feeling Sexy Naked in Seconds, According to Celebrity Pros
by Jessica Harrington 01/7/21