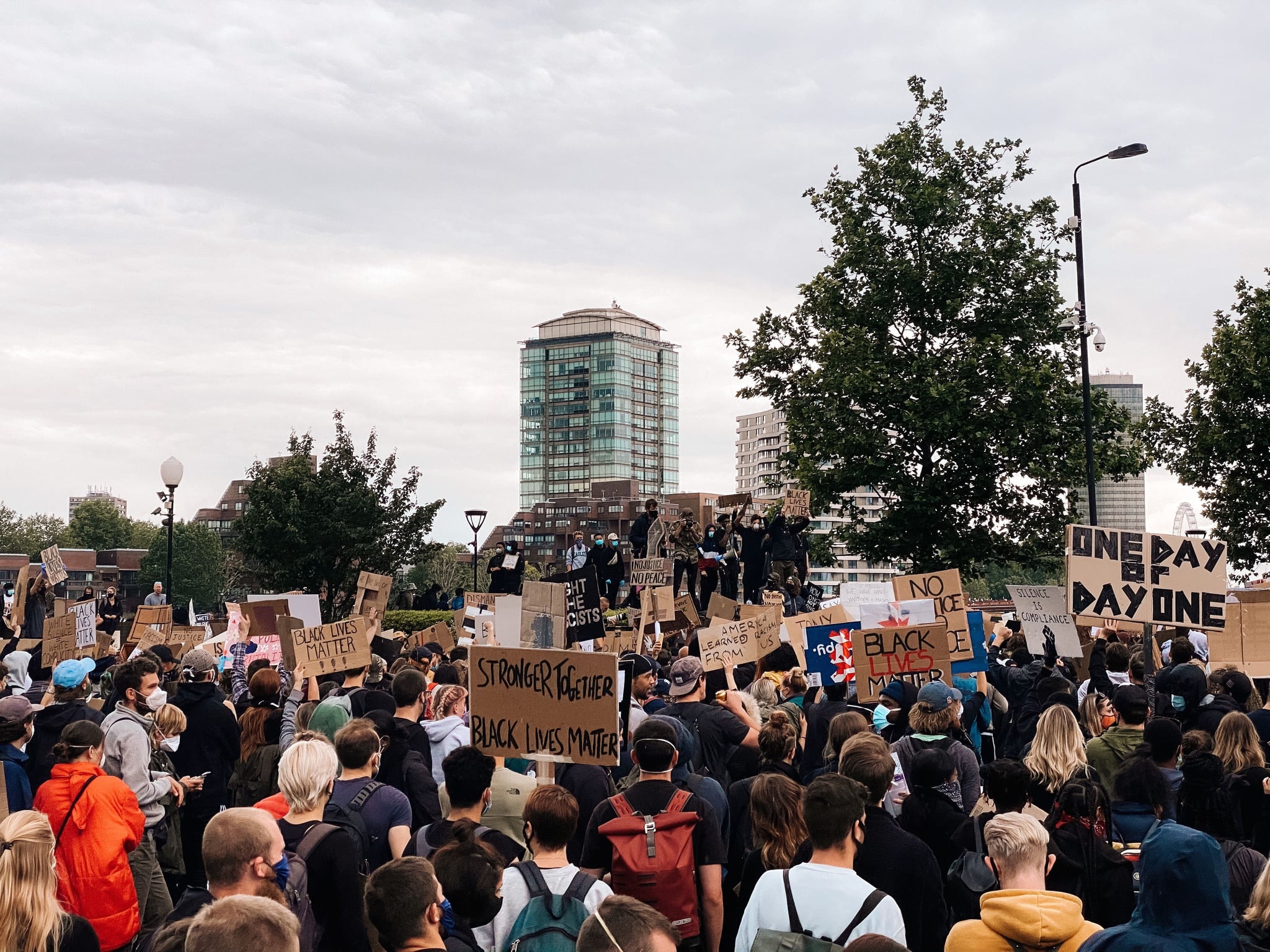 Attending London's Black Lives Matter protests was like feeling the beating heart of democracy around you. The energy of peaceful protest was powerful, educational, and incredibly healing. Thousands of people took over the streets of central London to dismantle systemic racism and challenge the parasitic relationships that the British empire and American capitalism have sought to normalise for hundreds of years.

"Teach Black History," "No Justice, No Peace, No Racist Police," and "Boris Johnson Is a Racist" are just a few of the chants heard from London's Black Lives Matter activists, who demand justice for the deaths of Black Americans George Floyd and Breonna Taylor, Black British transport worker Belly Mujinga, and British-Somali refugee Shukri Abdi.

I, personally, have found it difficult not to disassociate from friends who think that protests are a waste of time and the only real change is policy change. I agree that justice ends with policy reform, but it begins with peaceful protest and is sustained when we heal generational traumas by having one tough conversation at a time. Ahead, eight powerful young activists tell us why Black and brown lives matter in the UK.

"I want for the government to decolonise our education system. I'm tired of having to work for this. We've been enslaved for 400 years, and we've been marching for 60. My little sister is 8 years old, and she's scared that she'll die because of the colour of her skin."

"With these protests, I want for the government to decolonise our education system. I'm tired of having to work for this. We've been enslaved for 400 years, and we've been marching for 60. My little sister is 8 years old, and she's scared that she'll die because of the colour of her skin. I want her to be able to walk freely. I want her to be able to have equal opportunity. I want to be able to be seen, especially as a Black woman. I can't walk in the street without being afraid. I've seen my father being thrown to the ground and beaten up by white policemen, and now I have to carry that with me for the rest of my life. I saw that when I was 8 years old as well. Why would I have to see something like that? A white girl would never have to see something like that. That's what I'm tired of, and it's going to change." — Kim, 18, student

"Equal rights is something that we've been fighting for, for over a century. It's something that will be difficult to achieve, but the fact is that protesting resulted in the arrest of the four police officers, and this is what we're fighting for. It's for the system to take notice and pay attention to us. We deserve to be treated the same as anyone else, and we just want a level playing field. If we can even give them something to think about, which we're doing now. It's not fair for the system to have an easy ride. They need to be oppressed the same way we are, and for me, that's what this is about." — Ezra, 35, London Underground worker

"I want people to realise that, yeah, a change has been made and some justice has actually come from this, but there is so much more to be done. We are fighting so many years of oppression and discrimination, and we have to keep going to really solve this problem." — Alex, 21, student and youth mentor

"As a Black woman, I've gone through different stages of wanting to stay at home, feeling sad, protecting my energy, looking after myself, and now I'm at the restless stage, and I'm angry, so I need to be out here."

"In a way, even the timing is racist that we have to be out here doing this when we should be staying indoors, especially Black people, and staying safe. But I hope that these protests continue to shine a light on our experience and how we're being treated. Me, personally, as a Black woman, I've gone through different stages of wanting to stay at home, feeling sad, protecting my energy, looking after myself, and now I'm at the restless stage, and I'm angry, so I need to be out here." — Kayla, 27, creative industries

"I want people around the world, victims of racism, to see that they're not alone. I hope that the governments understand that this is a worldwide issue. Change needs to be made, we can't keep on going this way, and we're not going to sit down and take it anymore. It's time for us to fight back, and we will keep fighting back. I want racist institutions, like the US police system, to understand that reform is gong to come, and if that means abolishing the police system, then that's what we're going to do." — Penny, 20, student 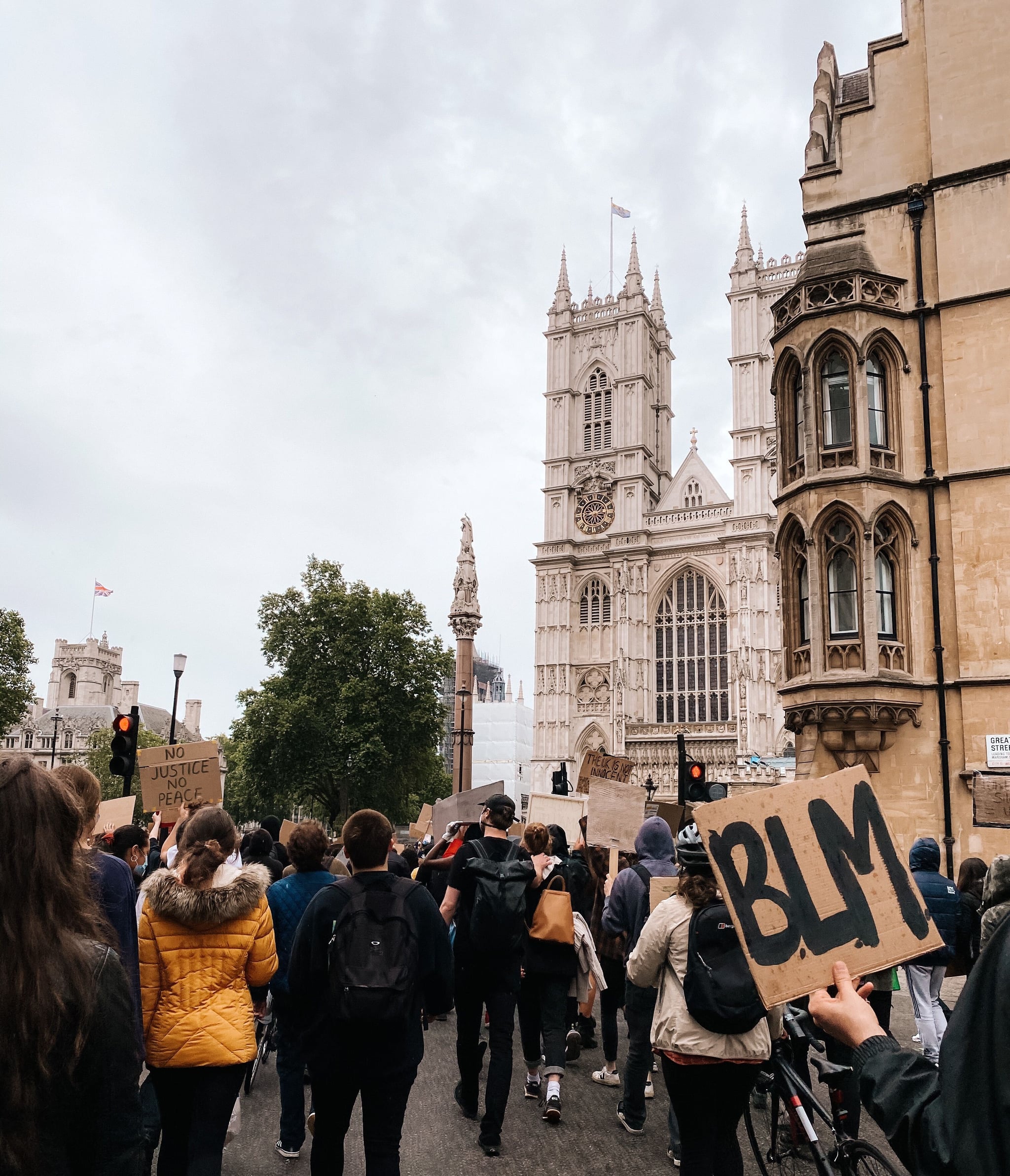 "There are so many things going on in the world right now, and that doesn't mean that this shouldn't take precedent. I hope that we learn from our mistakes. I have privilege in this life for being white, and the colour of someone's skin should not be a problem for me, for my kids, for my friends. As a gay woman, I believe no one should face any sort of discrimination. The timing of this during Pride month is significant to me no matter your race, gender, sexuality, anything. It's not white and Black, it's us against the system." — Alex, 28, graphic designer

"From the bottom up, people are starting to think about how they are a part of the problem and how they can be a part of the solution. From the top down, there needs to be accountability. A lot of people are hurt, and the leadership can do something about it. They can do something within the institutions, they can do it with free education, through their own connections with people. I'm hoping that they can see that this isn't just noise, we care about this, we are passionate about this, and people are dying." — Debbie, 21, student

"I hope that we spread the news about Black justice and to speak to our white counterparts and to get them realising the difference between being nonracist and antiracist. To show up for us. To come through. To educate themselves. To learn more. To not depend on Black and people of colour to educate them." — Cheri, 28, television producer

black lives matter
"We've Endured So Much": Michelle Obama Reflects on Black Lives Matter in 2020
by Chanel Vargas 3 weeks ago