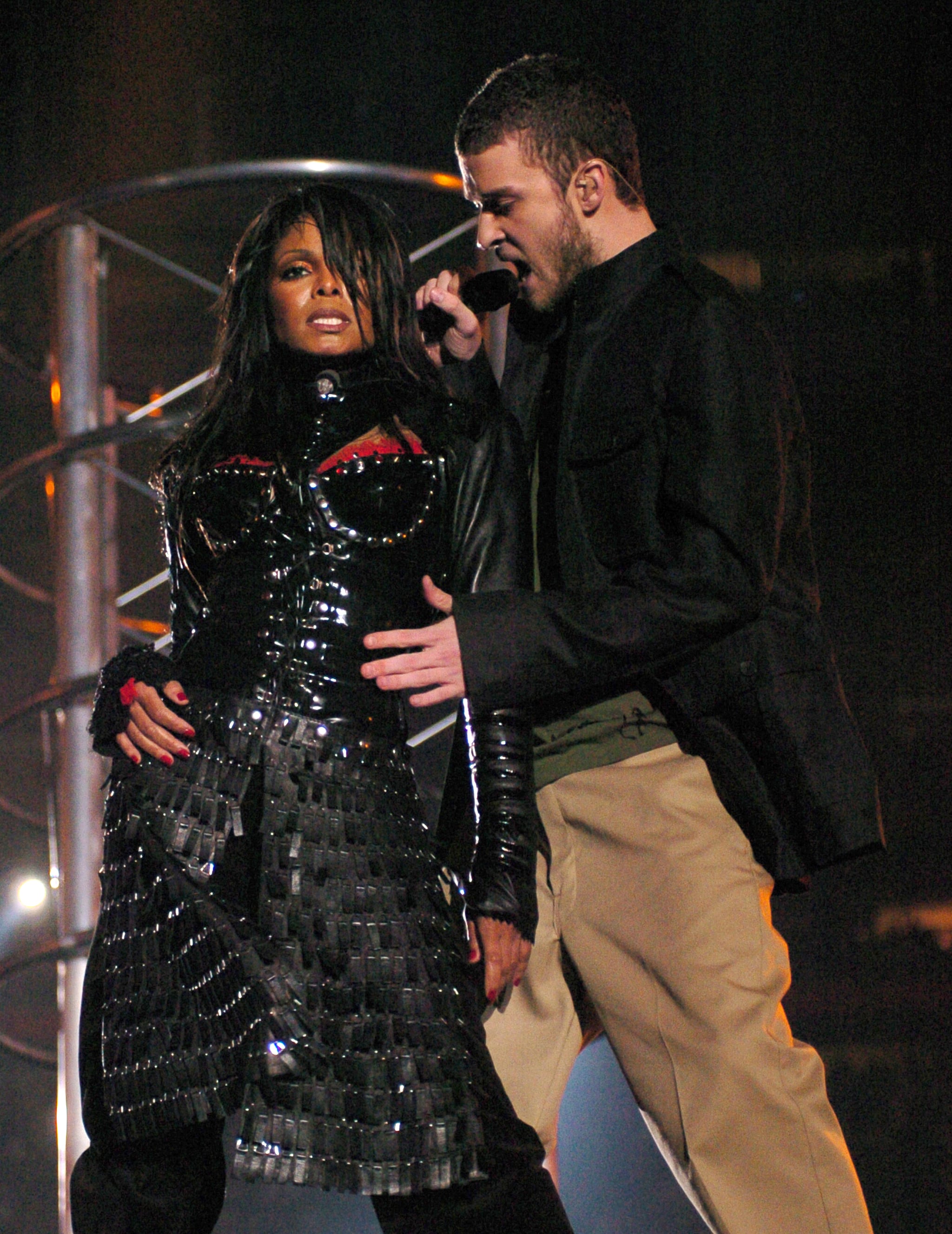 By the early 2000s, Janet Jackson was a global icon. At that time, her legacy included over a dozen consecutive top 10 hits, five Grammy awards, five No. 1 albums, multiple Guinness World Records, and countless other milestones. Even with some obstacles like discrimination and exploitation, it seemed as though her career managed to transcend the barriers many female artists have to encounter. Still, she was at the top of her game. But as revisited in Hulu's Malfunction: The Dressing Down of Janet Jackson, a wardrobe slip-up that lasted 9/16ths of a second on national television was all it took to knock her down.

The New York Times docuseries, which premiered on 19 Nov., recalled the events before, during, and after the disastrous 2004 Super Bowl halftime show. It focuses primarily on Jackson's performance with Justin Timberlake — which MTV, at the time, reported would promise "shocking moments."

The biggest shock came when Timberlake exposed Jackson's breast to millions of viewers on live TV. Unfortunately, the incident, dubbed "Nipplegate", affected everyone involved, but Jackson took the biggest hit. No one could have predicted how damaging that short moment would be to her storied career. But the most troubling reminder from the docuseries is how Timberlake walked away from the situation almost completely unscathed. It makes you wonder why that moment became Jackson's demise, but Timberlake's rise to superstardom. So how did the former *NSYNC member manage to escape the aftermath of the scandal scot-free? Easy: Misogynoir.

Related:
Janet Jackson Speaks Out About Performing With Justin Timberlake at the Super Bowl

In the early 2000s, America seethed with disdain for hip-hop, the rockstar lifestyle, and sexually-liberated people. And the 2004 Super Bowl provided the nation the perfect storm to mask its racist, misogynistic attitudes. The Hulu documentary reminds viewers of middle America's sensitivities at that time. Those worries played a part in choosing the 2004 Super Bowl performers. Critics already questioned the choice for MTV to produce the halftime show due to the network's risqué reputation. They also thought Jackson's image was way too provocative for a "family-friendly" event. So when the performance went left, and it came time to find a scapegoat, the country chose Jackson.

"The moment she did something out of line, a decision was made to just exclude her."

"Our culture doesn't know what to do with independent women, and definitely not independent Black women," New York Times culture writer Jenna Wortham says in the documentary. Forget about an independent Black woman who makes her own money, who knows who she is, and is apparently a completely sexually-liberated person. When there was an opportunity to punish her for it, they did." The 2004 Super Bowl incident is a prime example that Black women aren't allowed to make mistakes. And if they do, they are expected to apologise profusely. As Wortham points out, the very unrealistic expectations placed on us don't leave room for anything less than perfection. "There are these really rigid containers that the world expects Black women to fit into," she adds. "The moment she did something out of line, a decision was made to just exclude her. She really just became despicable overnight."

The phrase "wardrobe malfunction" has been burned into our minds since 2004. Jackson became both a punching bag and a punchline, all in one swoop. But Timberlake skyrocketed after the incident. He went on to score eight Grammy wins, four No. 1 albums, and was even invited back to headline the 2018 Super Bowl halftime show. All the while, Jackson's efforts to get back on top were stalled —she was unofficially blacklisted. Her career was never the same, but Timberlake had an unfair advantage on his side: white male privilege.

For years, Jackson looked more like the perpetrator and Timberlake a victim. His comment that the two gave "us something to talk about" and less than sincere "we're sorry we offended you" apology at the 2004 Grammy Awards was all the more proof that racism and sexism played a part in Jackson's fall from grace. Timberlake failed to take real responsibility, but no one attempted to hold him accountable the same way they held Jackson to the fire. Timberlake didn't even have the decency to defend Jackson. His apology came 15 plus years too late, in 2021. And even then, he sandwiched Jackson into his apology for disrespecting Britney Spears. He didn't even bother to apologise to both women separately.

"I am deeply sorry for the times in my life where my actions contributed to the problem, where I spoke out of turn, or did not speak up for what was right," he wrote in an Instagram post. "I understand that I fell short in these moments and in many others and benefited from a system that condones misogyny and racism. I specifically want to apologise to Britney Spears and Janet Jackson both individually, because I care for and respect these women and I know I failed." If the era of notes app apologies existed at the time of the Super Bowl scandal, maybe Timberlake wouldn't still be trying to right his wrongs.

The Super Bowl halftime show aftermath placed the public's focus on all the wrong things. I always wondered why the larger narrative wasn't how Jackson was seemingly violated and embarrassed in front of millions of people. Where was her justice? Too often, Black women's pain is not humanised, so it feels nearly impossible for people to empathise with us when we suffer — especially when history tells us we have always been treated as anything but human.

"No one looked at the Super Bowl scandal as a crime against Jackson's agency over her body."

In the Hulu film, Shannon Holland — author of The Offending Breast — mentions the "dehumanisation and commodification of Black bodies, particularly Black female bodies", when she references how we were treated during the Antebellum period in U.S. history. "If you see them as chattel, then they're simply Black bodies that really don't have crimes committed against them," she says. No one looked at the Super Bowl scandal as a crime against Jackson's agency over her body. Her tears as she exited the stage and fled the stadium that day were not that of someone who asked to be humiliated. Hulu's documentary arrived too late, in my opinion. Jackson deserved better than what she endured in the years following the incident. But in 2019, she managed to rise again as a Rock & Roll Hall of Fame inductee — reclaiming her rightful place as a living legend.

Malfunction: The Dressing Down of Janet Jackson didn't do much to answer many of our fundamental questions about the catastrophic situation. If anything, it made things seem more complicated. But it was nice to see people like Holland, Wortham, and Virgin Records former CEO Matt Serletic supporting Jackson and her choices. We may never hear directly from Jackson about what really went down that day, but I hope she's been able to find peace of mind.

Celebrity Deaths
As a Black Fashion Editor, I Have People Like André Leon Talley to Thank For My Dreams
by Shelcy Joseph 4 days ago