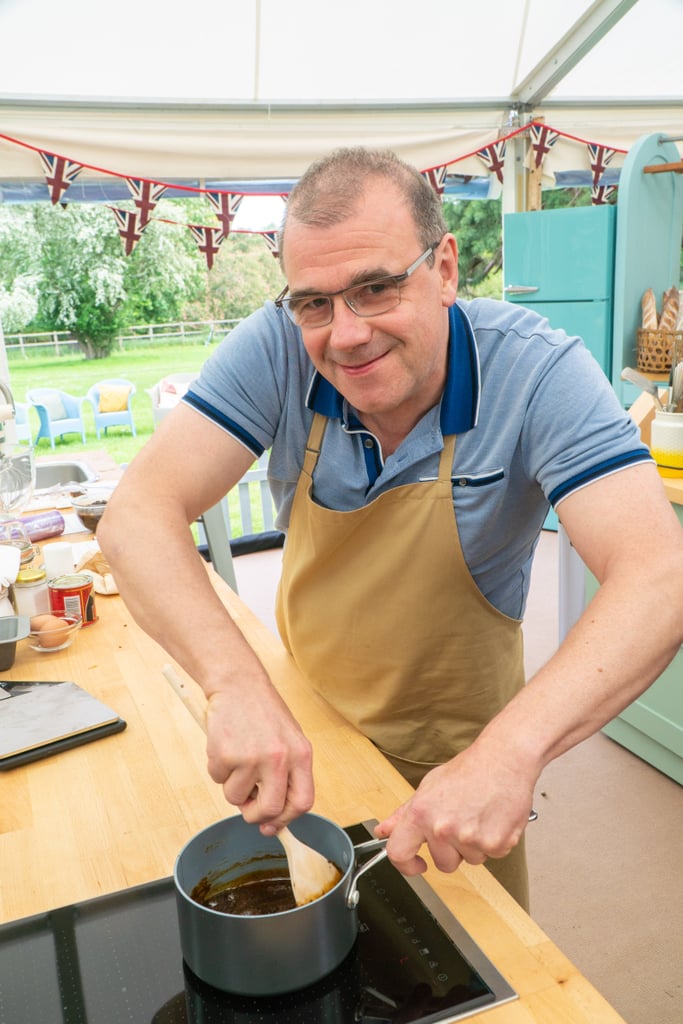 The Great British Bake Off's 12 bakers of 2021 have brought us plenty of magical moments throughout the 12th season of the feel-good show, but none more so that Jürgen Krauss. From the very first episode (remember that mullet-tastic "Achy Breaky Heart" opening?), he captured viewers' hearts with his uncanny resemblance to Winnie the Pooh, and that massive awwww moment when he called home to proudly announce his good news, only to be left hanging when his wife didn't answer. Thank goodness his family picked up the phone the following episode.

As if being crowned Star Baker for the first two weeks wasn't enough, Jürgen was crowned the "Baking Terminator" by fellow Bake Off contestant, Giuseppe. And he racked up a third Star Baker title in Caramel Week. Plus, he got a Hollywood Handshake in German Week.

The 56-year-old physicist, who lives in Brighton with his wife and son, moved to the UK from Germany in 2003. He loves playing the trombone. He has a pet rabbit called Humphrey. He referred to himself as Jürgy-Pops. What's not to love? There are many reasons Jürgen is the standout star of GBBO this year. And we're ready to show you them all.

Of course, there's his excellent baking. And his technical know-how. And his commitment — like the 107 steps it took to make his Caramel Week showstopper (no exaggeration). But, really, it's his hilarious actions and quirky comments that make him so lovable. Like when he sang his musical decoration in Dessert Week. And showed the world his powerful "French slap" kneading technique. Or when he revealed his "internal job" testing ice cream parlours during Free-From Week. And chucked a load of vegan sausage rolls on the floor, yet still served them. Legend. Ahead, glory in all of Jürgen's best moments. Keep going to watch his victory call gone wrong all over again.