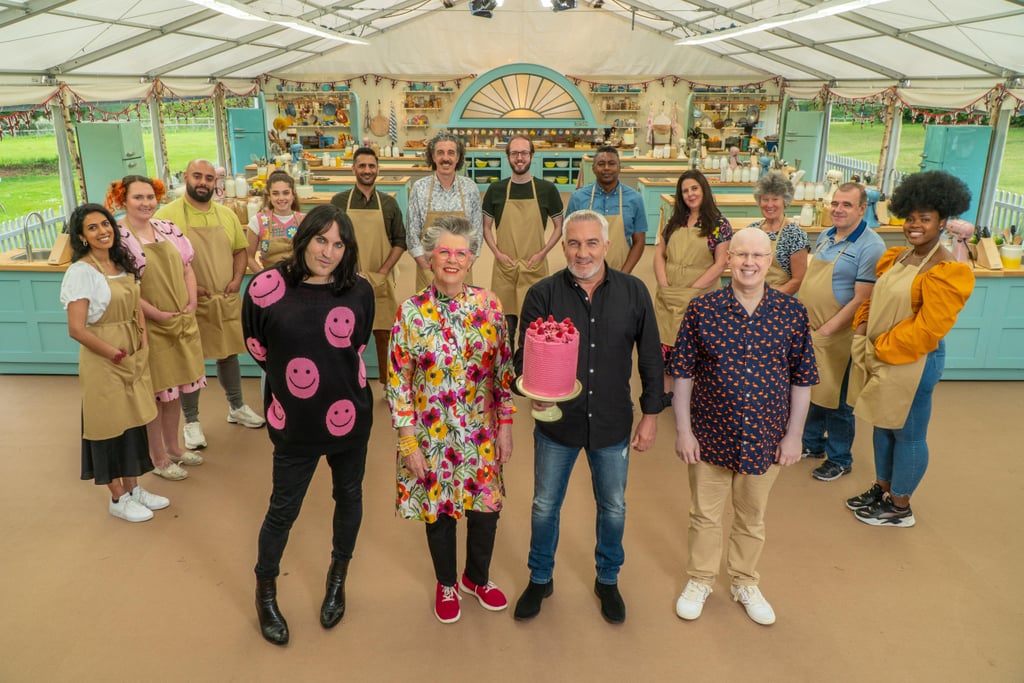 The Great British Bake Off 2021 had viewers disagreeing from the off with its country music-inspired opening scene. Hosts Matt Lucas and Noel Fielding, plus judges Paul Hollywood and Prue Leith, brought their best mullets and cowboy boots to Bake Off with a pun-filled, baking-themed rendition of Billy Ray Cyrus's "Achy Breaky Heart" — and Twitter didn't know what to make of it. Some fans loved the David Brent-esque level of cringe, while others most definitely were not here for it. There were cries of "painful" and "awkward" vs. "awesome" and "hilarious".

Paul lip-synching lines like "But don't bake my tart, my flaky pastry tart" while blue steeling straight down the camera was enough to divide Twitter, but Prue's moustache seemed to garner more favourable reactions. In fact, season 10 contestant Michael tweeted that he'd "swipe right". There was line dancing. There were fringed jackets. There was a shocked squirrel. As the GBBO Twitter feed pointed out, it was either the stuff of dreams or the makings of your next nightmare. And there were plenty of reactions that fell into each camp.

The musical shenanigans continued during the show, when Matt managed to sing the entire The Flintstones theme tune in German to contestant Jürgen. That got one viewer tweeting it was the "best moment of my entire life". Is there no end to that man's talents? He kicked off his copresenter duties in 2020 with a Bake Off-themed Boris Johnson impression, so that was quite the tough act to follow. It's no wonder he rounded up the rest of the squad to don wigs this time round — mullets will always come up trumps.

The show itself was the familiar mix of baking triumphs and disasters throughout the mini roll signature, malt loaf technical challenge, and gravity-defying showstopper, alongside banter and instant in-jokes. Prue look-alike and soundalike Maggie became an immediate target for teasing and setups, but she took it all in her stride — while wearing Prue's pink glasses . . . and creating her own mini Twitter meltdown by deriding mint choc chip ice cream.

Read through to see Twitter's divisive reactions to the 2021 opener.